Birthed by Indiana's Joseph Micucci, farfromit. was originally formed as a acoustic solo project back in 2015. With the increasing time spent touring in other bands like Everyone Leaves & Jetty Bones, Joe put farfromit. on the back burner for a little while, but a few years later Joe decided to pick up the project again, this time recruiting Everyone Leaves bandmate & friend Jordan Sloan on drums. Micucci & Sloan headed to the studio in late 2018 to record what would be their debut full band project entitled "Creamsicle". After announcing the partnership with DGR, farfromit. released a re-imagined full band version of "Afterthoughts & Longshots", a track that originally appeared on the 2015 acoustic EP "Songs I Wrote For Myself". A few months later, Micucci released a stripped down cover of Alexisonfire's "Side Walk When She Walks". "Creamsicle" was released on July 26th 2019 via DGR. 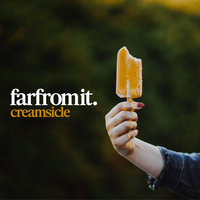