Starting in 2012 as Conquerors, Church Tongue are one of the most unique bands coming from the Midwest. Playing a style of metalcore that is heavily inspired by the not so typical aspects of hardcore & metal, Church Tongue released their debut album "Heart Failure" on Blood & Ink Records in 2016. This saw the band touring around the US & Canada, including performances at New England Metal & Hardcore Festival & Audiofeed Festival.

After a change in line ups, life & focus, Church Tongue released their follow up EP, "Hell Is Empty" on DGR in December 2018. The EP, lyrically based around Dante's "Divine Comedy", brought a fresh yet darker feel to Church Tongue while still sonically being a band you can't pin down. The band has since gone on a few runs, including a Spring 2019 tour with Distinguisher & Boundaries, as well as a record release weekend. Currently writing for their next release, we at DGR are excited to see what's next. 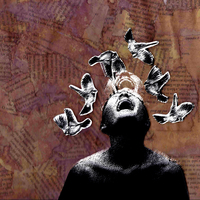